Photographing the night sky can be very frustrating if there is a lot of light pollution. That is when a light pollution filter may come in handy. I reviewed the Haida Clear Night filter for the Haida M10 filter system.

If you live in an area with lots of light pollution, it may become nearly impossible to take nice night sky photos. For me, there is not a single location to see the Milky Way on a clear night within a radius of almost 150 miles. Well, there are a few places that allow me to take images of the Milky Way, but then I need aggressive post-processing to make it stand out. Even in the so-called Dark Sky Parks of the Netherlands, there are still large bulbs of light at the horizon. A Bit of Background Information

Light pollution is produced by the excessive amount of light that mankind uses at night. It spills into the night sky, where it is reflected back from even the tiniest layers of clouds. On clear nights, with no visible clouds in the sky, layers of moist air can reflect the eerie yellowish light. Nights never become dark, obstructing a clear view of the heavens above. It also disturbs the day and night rhythm of nature, but in general, civilization doesn’t care about that.

The sodium-vapor and mercury-vapor lights produce a very specific color of light. Therefore, this narrow band of wavelength is easy to filter out. You need a filter that blocks a wavelength close between 575 nm and 600 nm. By blocking this wavelength, the light won’t be able to penetrate the filter, and will not be registered by the camera sensor. The first light pollution filter I used was the Lonely Speck Pure Night filter, back in 2017. It was a crowd-funded project, but other manufacturers followed soon after. I used the filter with good results for years. Now I received the Haida Clear Night filter for the Haida M10 system for a review.

A Closer Look at the Haida M10 Clear Night Filter

Haida has released the Clear Night filter in different flavors. You can choose between a regular filter that can be screwed onto the lens, a 100 x 100 mm square filter that fits most filter holders on the market, and filters for lenses with a rear drop-in system. Haida even has a filter for the DJI Mavic Pro 2 drone. I received the M10 drop-in filter, made exclusively for the Haida M10 filter holder. It drops in the slot that is used by the polarization filter in a normal situation. It fits perfectly, preventing any accidental light leaks. 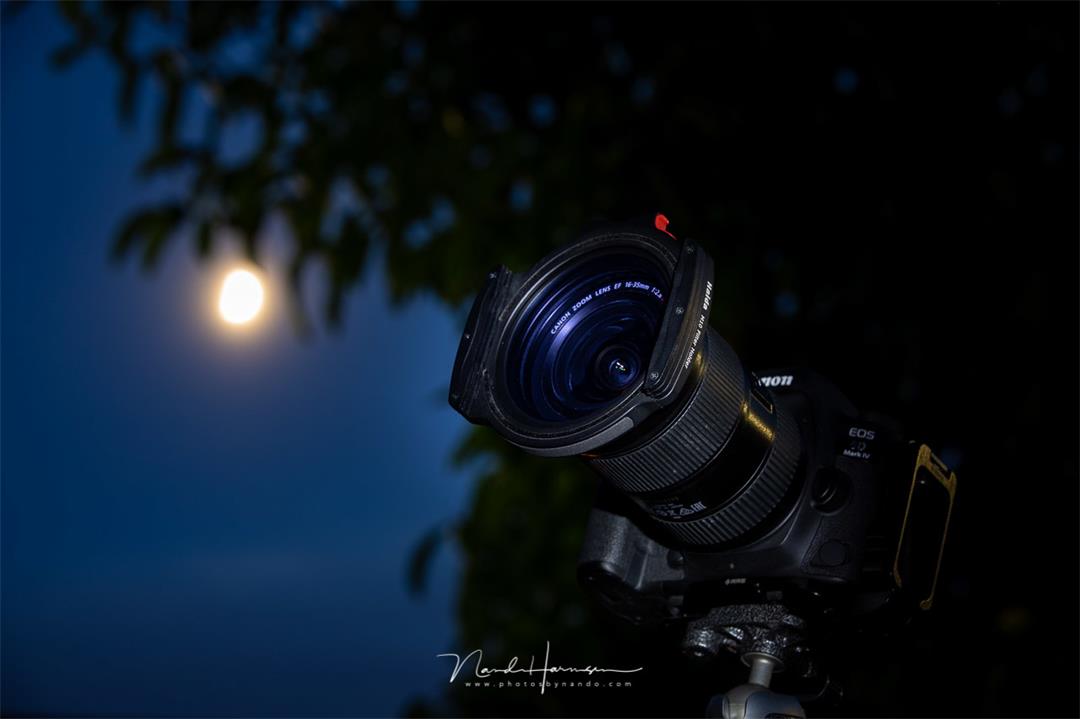 The Haida drop-in filter system makes placing a filter easy. There is no risk of light leaks, although this may be of little concern at night.

I love the way the Haida M10 filter holder is used. Placing the filter onto the adapter ring is very easy. It can be done with one hand without any problems, even in darkness. Nevertheless, it is wise to check if the filter holder is placed correctly. You wouldn’t want your expensive filters to fall. I wrote an extensive review for the Haida M10 filter system here on Fstoppers, if you're interested. I did the first experiments with the Haida Clear Night filter in the park nearby. There is a lot of light pollution present, but it is not a light-flooded city environment. It is about class 6 on the Bortle scale, on the far end near class 7. Because I used the Lonely Speck Pure Night filter before, I knew what to expect.

It was a gibbous moon during the particular evening, illuminating the sky in the typical blue light. I kept the white balance at daylight for this occasion and started shooting with, and without a filter. For both images, I kept the same settings: ISO 1600, f/4, and 1.6 seconds. I used a focal length of 30mm on a Canon EOS 1Dx Mark III. All images in the next before-after comparisons are without post-processing, and with the same camera settings. 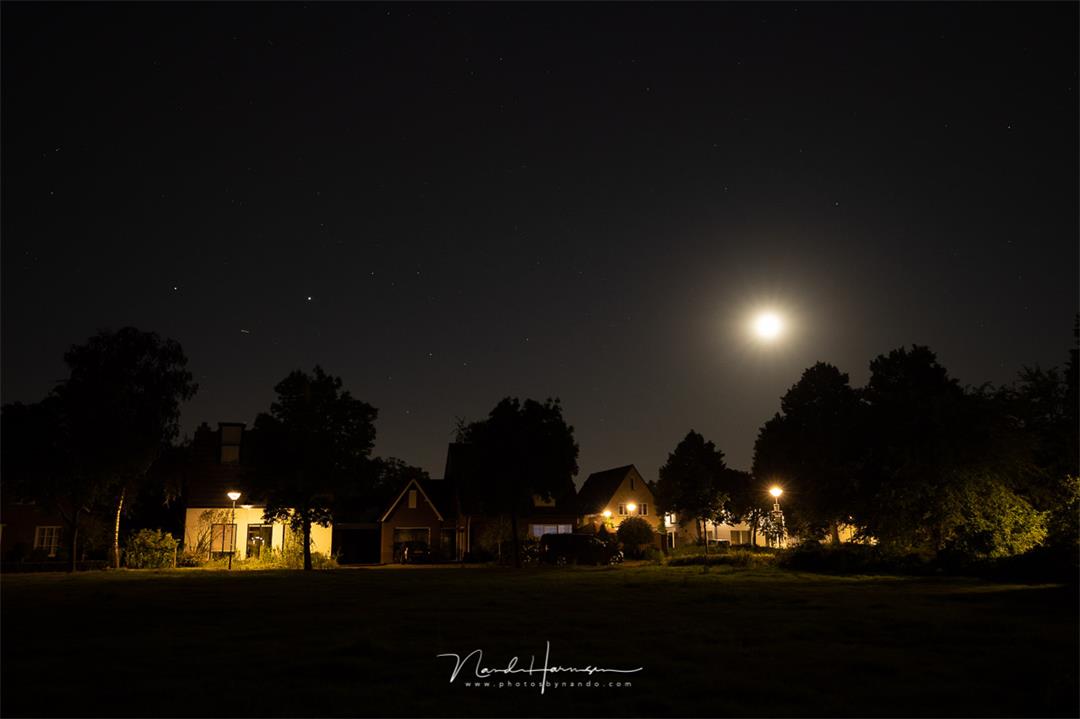 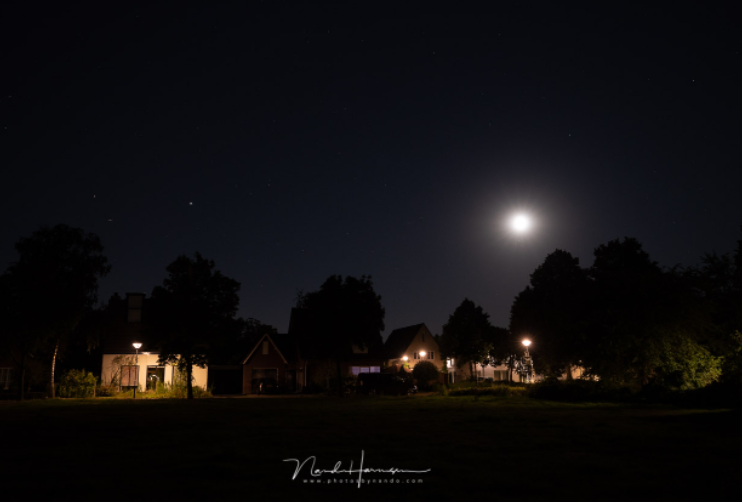 Next, I turned the camera in the other direction where comet NEOWISE should be. The comet was already on its way to the farthest reaches of space, far beyond visibility. But the stars shone brightly in the moonlit night sky supplemented by the sodium-vapor light pollution of my home town. Again, I photographed the park with the Canon EOS 1Dx Mark III and a 16mm focal length. This time I used ISO 3200, f/2.8, and a 5-second exposure on white balance daylight, for both images. 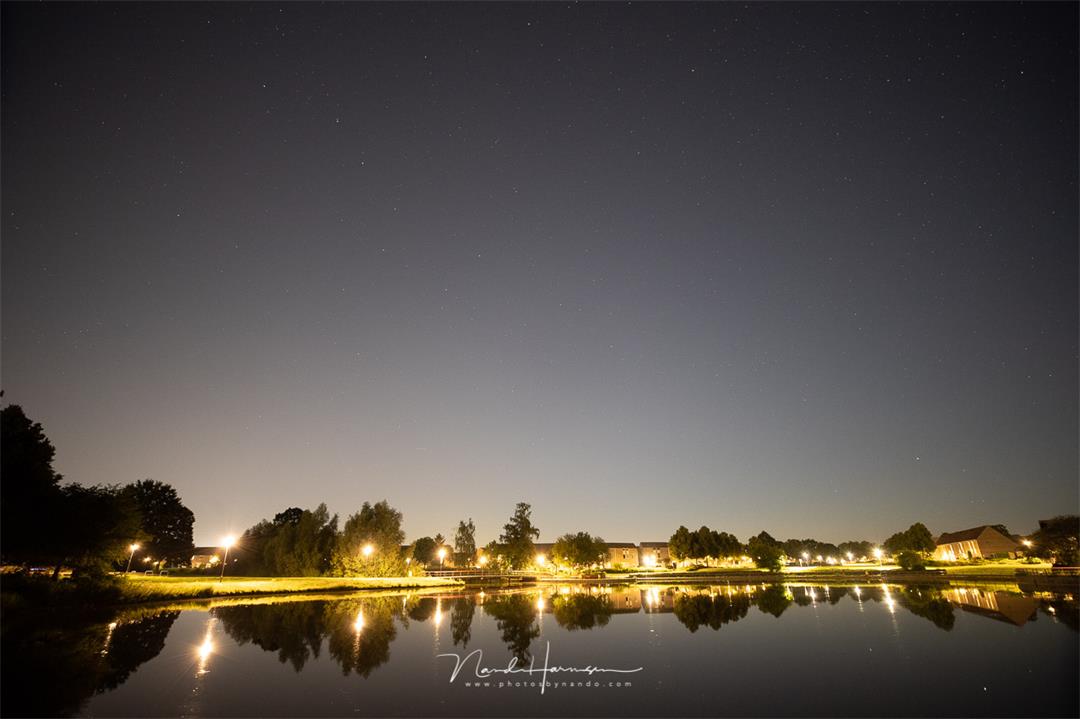 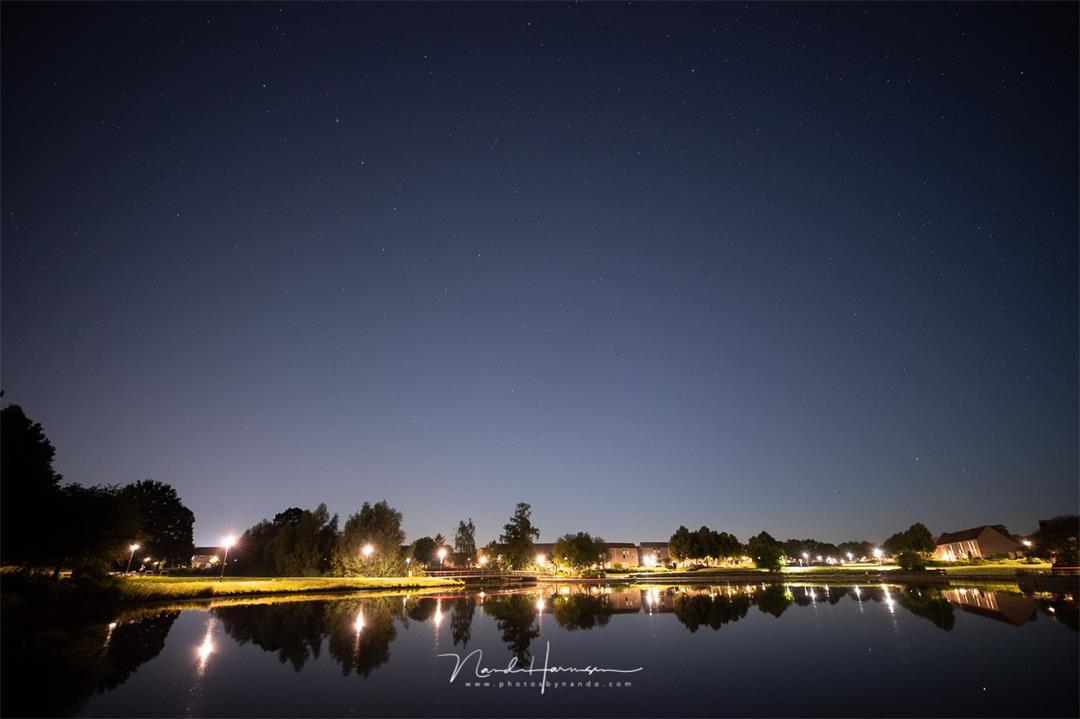 The filter is definitely making a difference when shooting a night sky in a light-polluted area. Although it does remove the yellow color cast, it isn’t removing the brightness in the sky itself. In other words, you won’t be able to see more deep sky objects with this filter under these conditions.

Shooting the Milky Way From a Dark Location

I used the Haida M10 Clear Night drop-in filter also in a dark location, somewhere in the middle of France under a rural sky, and a suburban transition sky (class 3, and 4 on the Bortle scale). The filter still has some effect, filtering out the remnants of the artificial light that gives the night sky a yellowish hue. 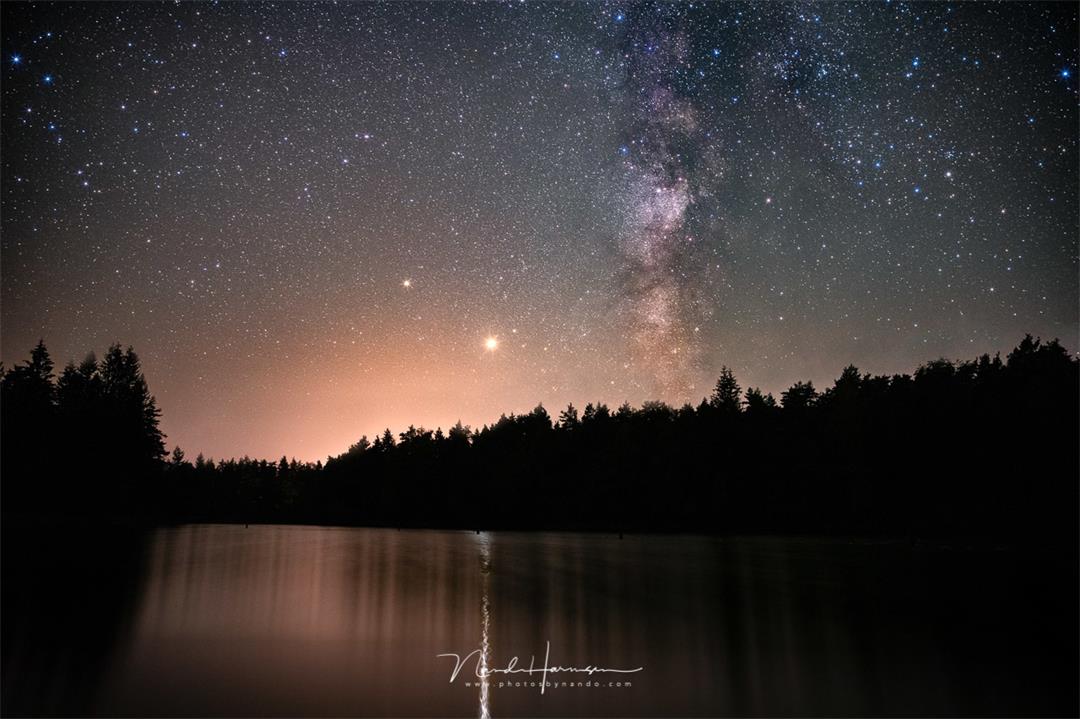 I believe the filter performs at its best under these conditions. Although it is a dark environment, the filter removes the last bit of color hues produced by artificial light in the surrounding villages and streetlights. Nevertheless, it is wise to stay away from the light-polluted villages that lay scattered through the land.

Does the Filter Have Any Benefit For Shooting Cities at Night?

Up until now, I have been using the filter primarily for shooting night skies, preferably with a nice Milky Way. But I also used it for photographing comet NEOWISE in the light-polluted Netherlands. This is the reason why I chose to use a night filter in the first place.

But I wondered if the filter can also be used for photographing cities at night. Would it have any benefit in this kind of photo, since all the available light is produced by artificial light itself? When using the Clear Night filter for this kind of photography it will remove the typical yellowish light, but it is producing a bit of magenta color cast.

The following before and after images are with exactly the same exposure settings, the same white balance, and the same post-processing. 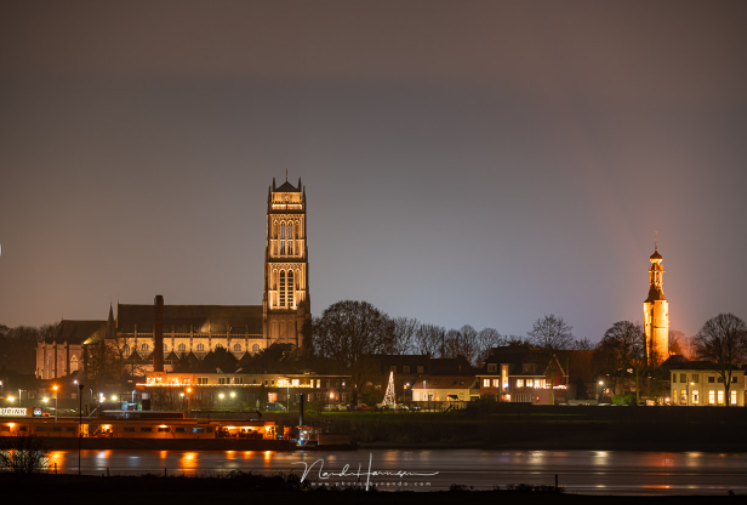 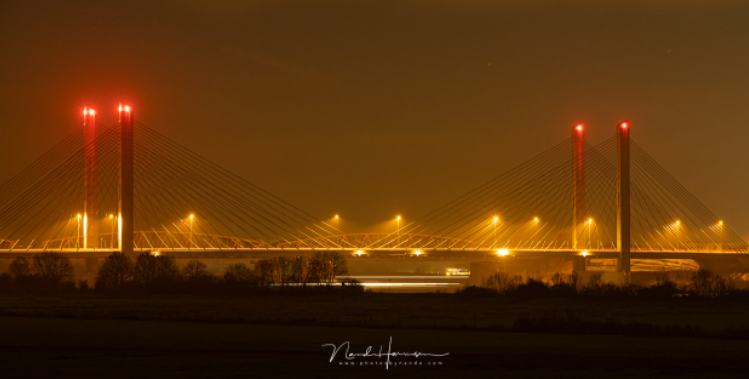 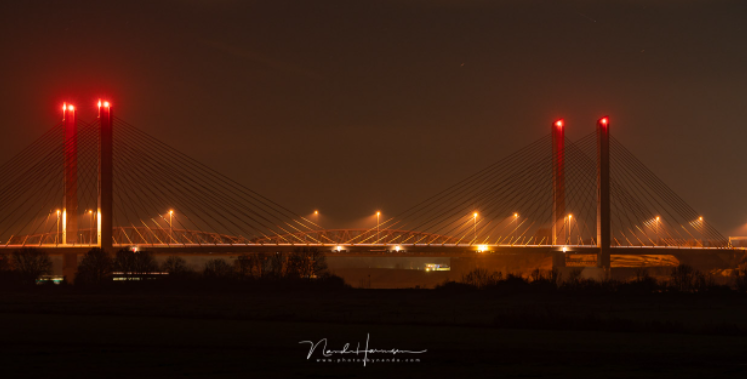 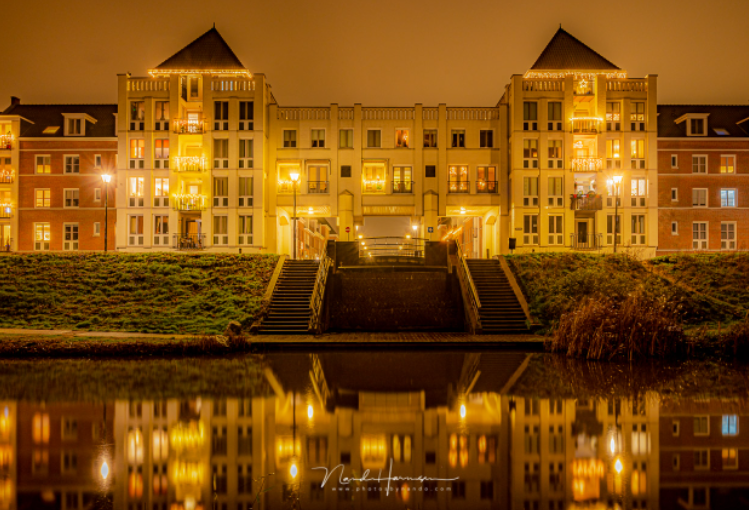 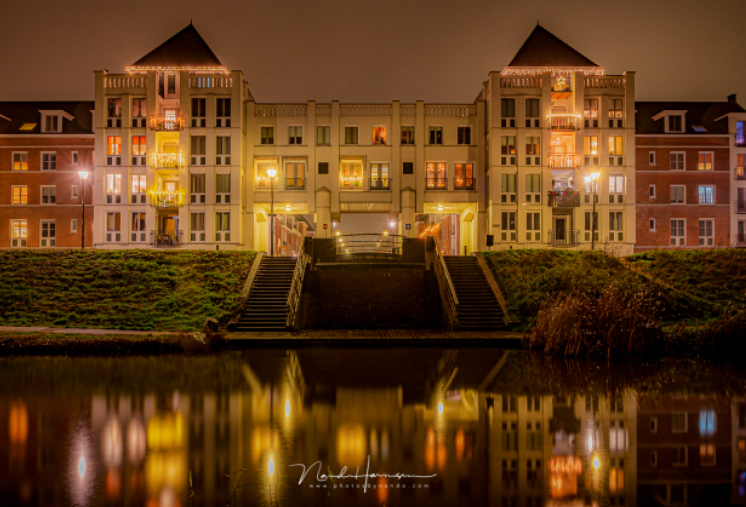 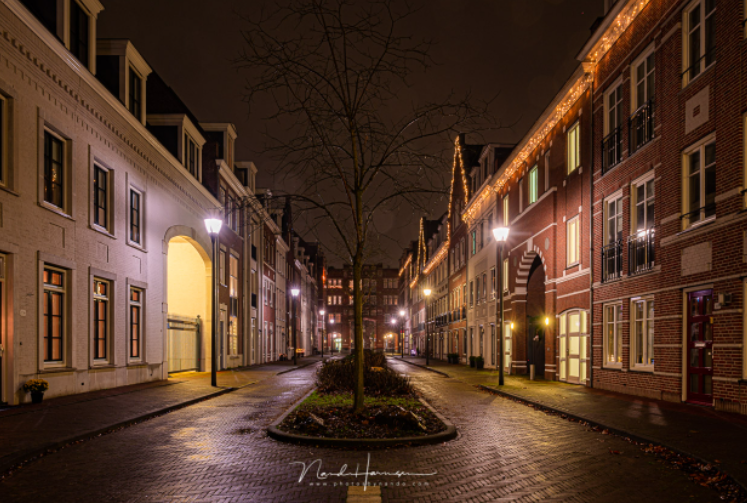 I was wondering if the result from the Haida M10 Clear Night filter could also be achieved with post-processing. When I did try it in Lightroom Classic, I noticed it can mimic the same result, but it does have a small difference depending on the type of light available. The reason is obvious: The night filter is blocking that the small band of light, which does not reach the sensor. The images without the filter do have that specific color of light in the image, which cannot be filtered out completely.

The before and after images below is post-processed in Lightroom Classic, to achieve a similar result. Can you tell which one is shot with the filter? Although it does show a bit of difference, I think there is only a limited benefit from this filter when shooting inside a city at night. But it does make a big difference if you are shooting the night sky itself. For that, the filter does have a big benefit.

The filter is holding back about one stop of light, something to take into account when shooting the Milky Way. You might need to bump up the ISO one stop to compensate for the loss of light. As expected the filter has little to none effect of you are photographing the night sky from a typical truly dark site. This would be a class 1, and 2 on the Bortle scale. Because you lose one stop of light, it would be wise not the use such a filter under these situations. From class 3 or more, the Haida Clear Night filter can help you suppress the typical colors of light pollution. The filter might also help to achieve more natural-looking night shots of cities and streets, but the benefit is much less prominent. It would depend on the situation and the type of artificial lights. If there is a lot of night sky in the frame, the Haida Clear Night filter will have a significant effect. If there is no night sky in the frame, there will be no real benefit.

Is also usable for street photography (but limited)

The Haida M10 drop-in filter is easy to use

Available as a drop-in filter, normal filter, and square filter

Color cast is removed, not the brightness of the sky itself 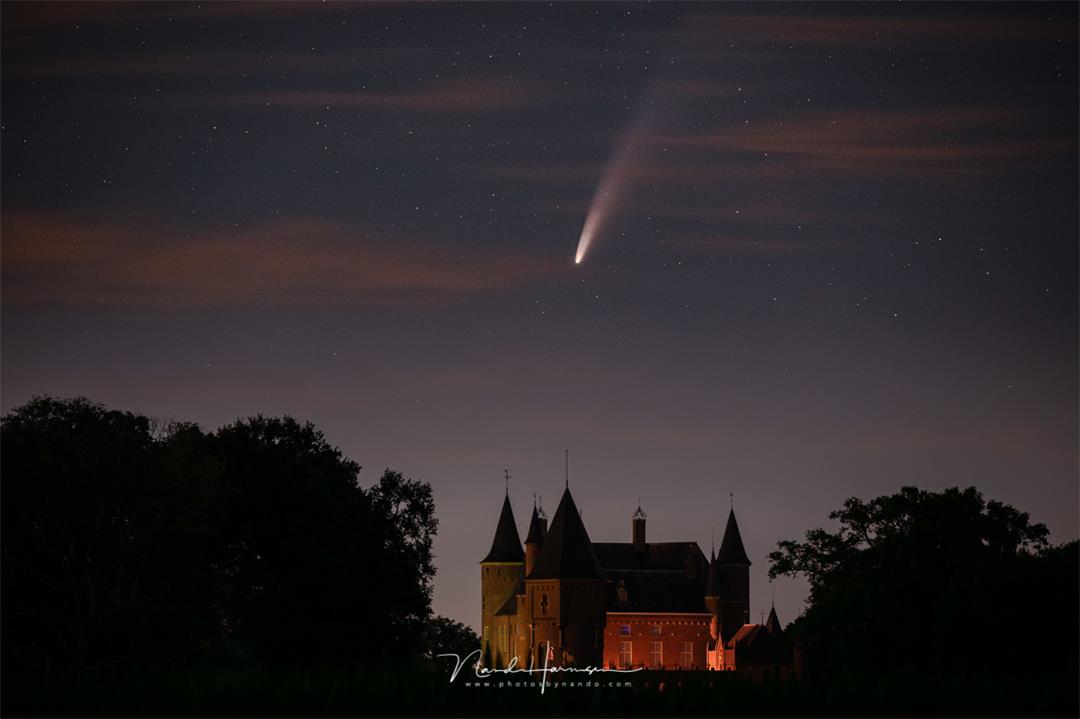