I had been wanting to test the Haida NanoPro MC clear-night filter while photographing auroras, especially to check how it would influence the color of the northern lights.

Auroras are best enjoyed, and photographed, in an area with as little light-pollution as possible... but unfortunately that is not always possible, maybe especially not on short notice.

I got a great opportunity while in Finnish Lapland this March. When a good aurora storm hit I went to the centre of Rovaniemi to photograph its Jätkänkynttilä bridge. This 'Lumberjack's Candle' bridge is named after the main pilons, which resemble the candles that the lumberjacks used to make by partly splitting a log in quarters or eights and starting a fire in the middle; here 36 sodium fluorescent lights imitate the fire. A lot of artificial light comes from this bridge and from the town's centre behind it. I was lucky enough to have a large aurora stripe appear above and next to the bridge and doing it's thing there for almost an hour.

I created a little seat in the deep snow next to the frozen Kemijoki river and photographed with and without filter for a long time during this cold night, trying to catch some nice shapes in the northern lights.

Since the river is frozen and covered with snow (the markings on the snow are actually from snow scooters, hikers, etc that use it as a quicker road during wintertime) all snow turns yellowish in the images. The artificial lights created a bit of a haze around the bridge and

above the city centre too. 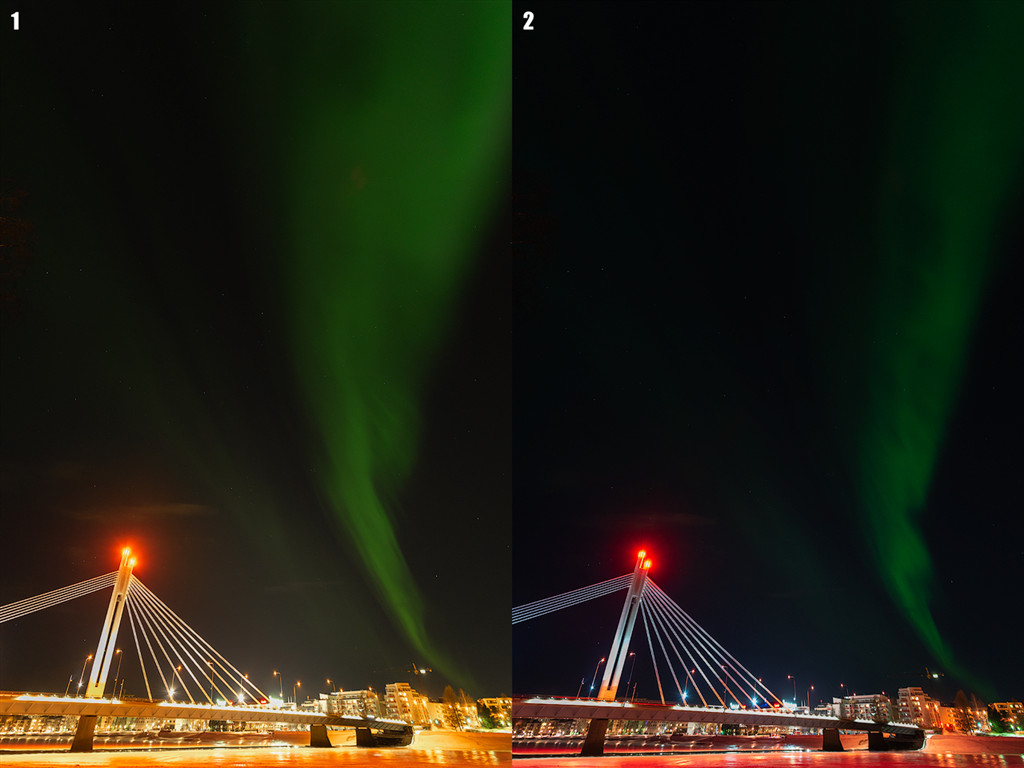 When comparing these, it can clearly be seen that the haze around the bridge is removed well by the filter. When the exposure is opened up more in the further processing of the raw file, the version with filter gives nicer and deeper blue tones in the night sky.

The colors of the reflected light on the snow have changed to more pinkish due to the filter. I guess it's a matter of preference which one you like better. I was satisfied that the colors of the auroras here were not modified by the filter, and the shapes of it are clear and nice.

As mentioned in my previous review, for the filter to reach its effect, it darkens the exposure some, between 0.5 and 1.0 stops. You will need to check your settings and judge what ISO and shutter speed to use. The shutter speed is an important factor for clear aurora images sometimes. When the auroras are very dynamic a faster shutter speed is needed to capture the beautiful shapes without blurring them. This will mean that you have to bump the ISO a little extra. Of course, you can take an exposure with lower ISO and a longer shutter speed for the foreground and other elements without auroras, and blend it in in Photoshop for a cleaner end result. 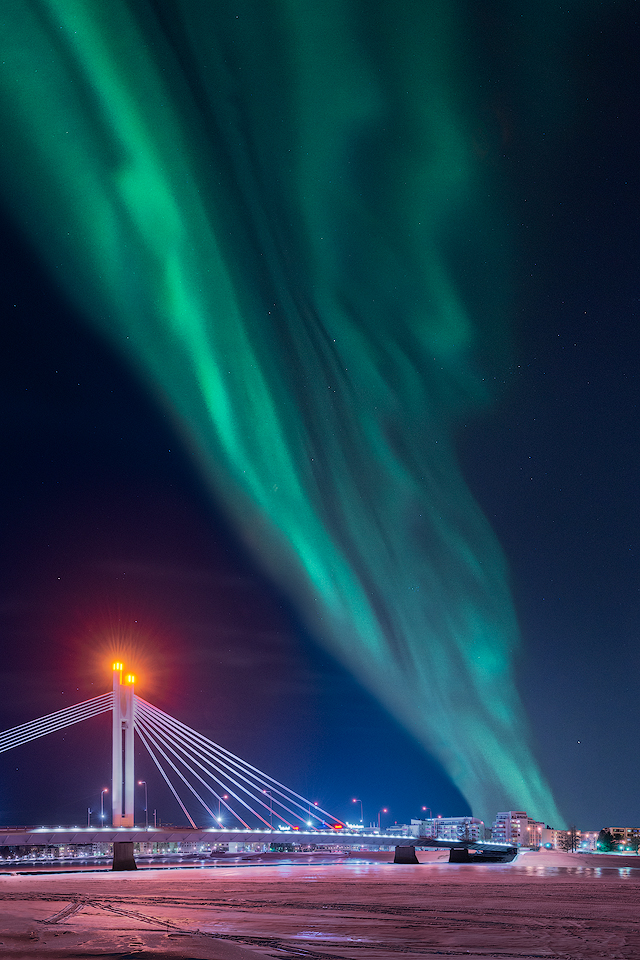 Several other things needed to be done to this night image, when looking at the raw files:

- I find the sky itself too dark

- get more stars visible from the raw file if possible

- add some contrast to the aurora

- adjust the color of the snow in the fg: I used the exposure with filter for the foreground snow too, since I liked the pinkish color better below the deep blues of the night sky.

- I adjusted some of the light in the top of the bridge's pylons back to orange, since the lights there are that color, imitating fire.

When all this was done I ended up with the image shown here. This also shows the flexibility of a raw file, compared to the first basic adjustments in image 1 and 2.

I like the effect the filter had here and that it did not disturb the auroras in the exposures. It gave me extra flexibility in post-processing and I will definitely put it in front of my lens again if a similar situation occurs.